My interest in diving began when I was around 14 years old at the same time as I started keeping marine aquaria. A friend from school was snorkelling at Shelly Beach, near Manly, to collect fish for his marine aquarium and invited me along. Despite it being cold (it was Autumn and I didn't have a wetsuit) and despite having to travel for over an hour each way on two separate bus routes to the dive site, I was hooked. It wasn't long before I bought a wetsuit, weight belt and other gear and I was diving fairly regularly over Summers and early Autumn. Most of my snorkelling was for collecting marine fish for my aquaria - another passion - but I would also dive for fun. 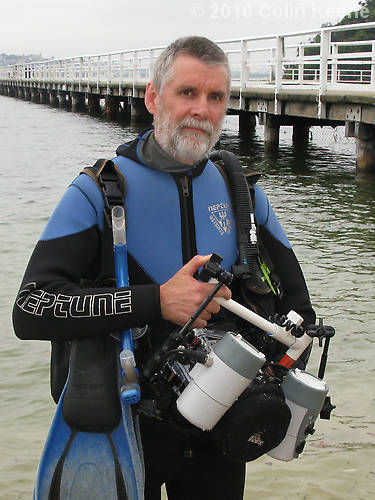 The snorkelling and marine aquaria got me interested in marine biology and so I had to decide what to do after school, there was only one thing I wanted to do: study marine biology. In 1978, I started a marine science course at the University of New South Wales and also joined the Uni's dive club, Late in 1978 I undertook a open water dive course through the club and I was soon a SCUBA diver. The dive club gave me plenty of opportunities for dives plus I continued my collection of marine fish.

In early 1980, I bought my first underwater camera, a Nikonos III. Other than being fully waterproof, this was a fairly basic and completely manual camera. Once I mastered its use, I was able to take some pretty good shots, although compared to the digital cameras I have used recently, it was very primitive.

In 1980, I had my first trip to the Great Barrier Reef. This was a very inexpensive trip organised with the Uni dive club. We travelled by train over 2 nights to Gladstone where we boarded a chartered boat to take us to Tryon Island (in the Capricorn Group). Tryon Island is a small deserted coral cay and so we had to take our own food and water for the 2 weeks we spent on the island. We also had 2 boats to get to the dive sites and a compressor to fill our tanks each day. It was a thoroughly enjoyable trip.

The closest I got to the Great Barrier Reef for some time was a day trip to "the outer reef" from Dunk Island where my wife and I spent our honeymoon at Christmas 1985. We only snorkelled there as my wife does not dive. We also did a bit of snorkelling around Dunk Island itself, but it is very bare compared to the real reef.

We had a couple of holidays on Lady Elliot Island in 1989 and 1993. Lady Elliot Island is at the far southern tip of the Great Barrier Reef and it is considered by some to not be part of the GBR, although it is in the GBR Marine Park. It is a coral cay and is surrounded by a full reef. I got quite a bit of diving in on both trips as well as snorkelling each day with my wife.

Until around 1998, I was not very diligent with logging my dives. I logged them at all it was to a diary and I only wrote down very basic information. Unfortunately when we moved house in 1998, I misplaced diaries and so I very few records of dives prior to 1998. Some dives I can work out from my records of the photographs I took but if I didn't have a camera, nothing got recorded. I do have one logbook that I kept from 1978 to mid-1980, but I believe it is missing a lot of dives. In 1998, I started logging my dives on the PC. The quality of my logs improved further at the end of 2000 when I purchased a Citizen Hyper Aqualand dive watch which did most of the work for me. I now also have a Citizen Cyber Aqualand NX and I always have this on a dive and will have the Hyper Aqualand attached to my camera. Looking at my dive log, the improvement is obvious.

My next trip to the tropics was not until September 2002 when I was invited by a coral biologist friend, Anya Salih, to join her and Mikhail Matz on a research trip on the Undersea Explorer. This was my first liveaboard experience and while we dived four times a day for 5 and half days, I had a ball. I took my old Nikonos III on the trip and got some satisfactory photographs. See more about the trip here: Undersea Explorer - 14-20 September, 2002.

A year later, Anya organised another research trip with a lot more researchers. Earlier in the year I had bought a Nikon CoolPix 4500 and Ikelite Housing and so this was a welcome change from the Nikonos III on the 2003 trip. Read about the trip here: Undersea Explorer - August 30 to September 5, 2003.

Incidentally, if you check my dive log, you'll notice a dive in Long Island Sound, New York in 2003. Between getting the housing for the CoolPix and doing the Undersea trip I had to go to New York for business. I know a diver on Long Island so I took all my dive gear (minus weight belt and tank) and camera gear with my on the business trip as it was not much extra effort. This is the only time I have dived outside Australia.

I didn't get a reef trip in 2004 as I was expecting Anya to have another trip but the year went by and she didn't organise one. I had decided that I would make an annual trip so on 2005 I organised a trip with some friends. The trip nearly didn't happen for me as I tore both my hamstrings (having a foot race with my nephew) 2 weeks before the trip. Despite the pain and the bruising, I made the trip, although only wore one fin for all but the last dive. The worst part of the trip was actually the flight up as it hurt to sit and I also had trouble walking. Once I got on the boat, everything was much easier. In hindsight I could have worn both, but I didn't want to take the chance in further injuring the worst of the two hamstrings and possibly not diving at all. I never did finish the trip report for that trip, although there is a summary of the dives here: Undersea Explorer - 10 to 16 September 2005.

In August 2008 I went on my 6th trip and final trip on Undersea Explorer and you can read about the trip here: Undersea Explorer - 16 to 22 August 2008. It was a fabulous trip, as always, although having influenza for most of the trip did limit the number of dives and my enjoyment. Unfortunately, in early 2009 due to the global financial crisis, Undersea Explorer ceased operations and so I never got to do the Far Northern Excursion.

I had no trips away in 2009 or 2010 but did dive fairly regularly around Sydney with St George Underwater Centre Dive Club. Most of the dives are on the south side of Sydney and I got to know some great sites as well as some great divers.

In January 2011, I went on my first overseas dive trip to Vanuatu, with St George Underwater Centre Dive Club. It was a thoroughly enjoyable trip but I was somewhat disappointed with the quality of the reefs we dived. They were not as good as what I'd experienced on the Great Barrier Reef. In early October 2011, I went to the Solitary Islands for a weekend dive trip with the club and then in October 2011, I went with the club to Borneo, staying at Kapalai water village. This was a fantastic trip, the diving was outstanding and I saw my first flamboyant cuttlefish in person. This was also the first year I'd got close to 100 dives in a single year. While I was helped by the 3 trips away, my Sydney dives had also increased.

Another great year of diving was 2012. I had a trip to Jervis Bay in April, a trip around Komodo Island in August and a trip to Port Stephens in October. The Komodo trip was very enjoyable with some great diving and sights. You can read all about it here: Komodo 2012. This was the first year where I did over 100 dives amassing a tally of 120 dives. I also learned to use a rebreather. I mainly learned for the Komodo trip but didn't end up using a rebreather on the trip. One day I'll buy one for extra long dives around Sydney.

My diving year in 2014 was not as good as 2013, but still pretty good. I went to South West Rocks and Bali in March and had all sorts of adventures during the year. See: 2014 - A Year in Review.

It is September 2015 and I have already done over 100 dives. I am loving my diving more than I ever have and dive every weekend. In fact, I haven't missed at least one dive every weekend since April 2013. I want to see how long I can keep the run going. You can also read about some of the things I'm seeing on my Photography Blog.