2015 was another great year of diving. I had some fantastic dives, dived at some new locations as well as enjoyed diving at my favourite sites. I saw some new animals and I also saw some familiar animals in a different light.

I'll cover the boring statistics first and then I can concentrate on the fun stuff. In 2015 I did a total of 174 dives which is 44 more dives than 2014 and 1 more than in 2013 - my all time record. Considering that I didn't do any dive trips as such, that's a pretty good tally. Not working for most of the year helped as I did a lot of mid-week dives.

My average dive time was just over 80 minutes. This was a lot more than the averages for 2014 (~70 minutes) and 2013 (73). My longest dive was 110 minutes which was a day dive at Bare Island. My shortest dive was only 33 minutes. This was as Sail Rock in Thailand and the dive was cut short because one of the divers in the group was running out of air. My longest dive at The Leap was 102 minutes which was helped by a good fill on my 15L tank and wearing a dry suit so I wasn't cold. Cold has been my biggest problem with long dives and I really need to get a new wetsuit.

I spent 234 hours underwater. That's equivalent to 9.75 days. It would have been nice to reach 10 days but it is still a long time underwater.

I dived every single weekend of 2015. Some weekends I only got the one dive in but others I dived as many as 4 times. There were some weekends where the conditions were very poor and the dives were not all that enjoyable but most dives were good. I have actually dived every weekend since April 2013 and want to see how long I can keep the run going. I find it good incentive to dive every weekend, not that I really need the incentive.

The Leap remains my favourite dive site as can be seen from the table below. There is so much to see, including seahorses, weedy seadragons and pygmy pipehorses. Bare Island is a close second, probably due to the ease of diving there, the abundance of pygmy pipehorses and that there are so many different dives that can be done there (e.g. Deep Wall, Isolated Reef, etc.). Now that there are seahorses near The Steps, it is also an enjoyable dive as I can see seahorses, pygmy pipehorses and weedy seadragons on the one dive just like The Leap but with a shorter dive.

My interest in Shiprock has waned and I only dived there when conditions were too rough to dive elsewhere. I didn't do many night dives which is why there are fewer dives at Camp Cove. Some of my night dives were at Bare Island which proves to be an interesting site for night diving.

I didn't do any specific dive trips in 2015. I went to Thailand for a friend's wedding and took the opportunity to dive there (and to keep up my weekend diving record.

In July I was in Koh Samui, Thailand for a friend's wedding. There's diving nearby so I took my dive gear with me and did 10 dives. A nearby island, Koh Tao, has over 50 dives centres on it and apparently issues more diving certificates than any other location in the world. That said, the dive sites I visited were not all that interesting and were quite barren considering they are in the tropics. The coral cover was sparse and not very colourful. The number of different fish species probably wasn't much different to what we get around Sydney. There were a few species that were new to me so that added some interest but on the whole I was underwhealmed by the diving there. I would not visit that part of Thailand just for the diving.

Other than Thailand, Minmi Trench was the only new dive site. I dived there twice. I enjoyed the dives there and will probably go back if Joe runs the boat out there. One of the worries about Minmi Trench is being able to find the anchor line. The first time I dived their Dan and I were not able to find the anchor and had to do a mid-water ascent and safety stop which is a little scary in the opening to Botany Bay. Fortunately we surface a few metres from the boat and had less swimming than if we'd come up the anchor line. On the second time I dived their, AJ ran out his reel so it was just a matter of following it back.

I did get back to Henry Head for a few dives in 2015 after not diving there at all in 2014. Unfortunately, most of the seahorses have gone. I did see one seahorse on a couple of dives and it was one that I had seen in 2013. There are still a lot of weedy seadragons and red indianfish and we even saw a red-fingered angler a couple of times.

Even though I have been diving since 1978, I still managed to see a number of species for the first time in 2015. Some of those species were from my trip to Thailand so they aren't all that surprising but some of the ones I saw in Sydney were quite mind blowing that I had never seen them before. 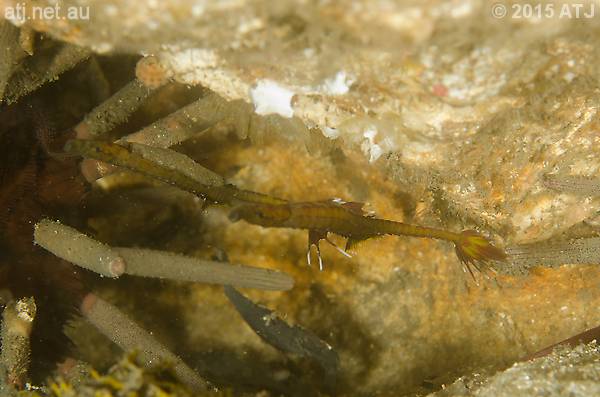 A pair of eastern upside-down pipefish, Heraldia nocturna. Note the eggs on the male.

In May, while swimming from The Monument to The Steps a wide-bodied pipefish, Stigmatophora nigra, swam past me. This was the first time I'd seen this species. 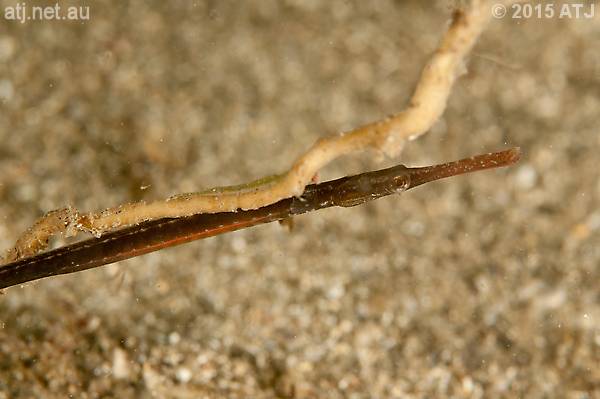 On my last dive at The Leap for the year I stumbled on a javelin pipefish, Lissocampus runa, while looking for a pygmy pipehorses. I was very excited when I thought it was a rare red pipefish, Notiocampus ruber, but Rudie Kuiter confirmed it was a javelin pipefish. This was still a first for me. 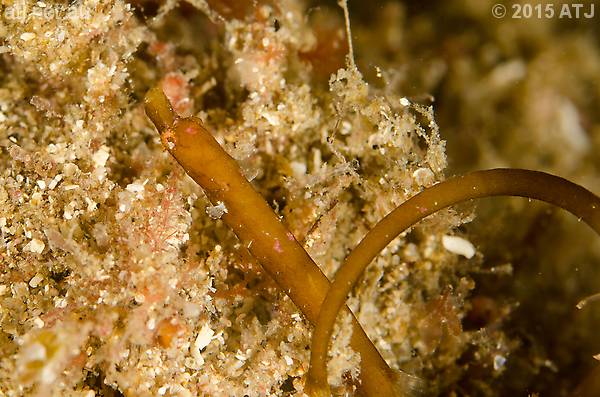 I saw my first blue-ringed angelfish, Pomacanthus annularis, while diving in Thailand. 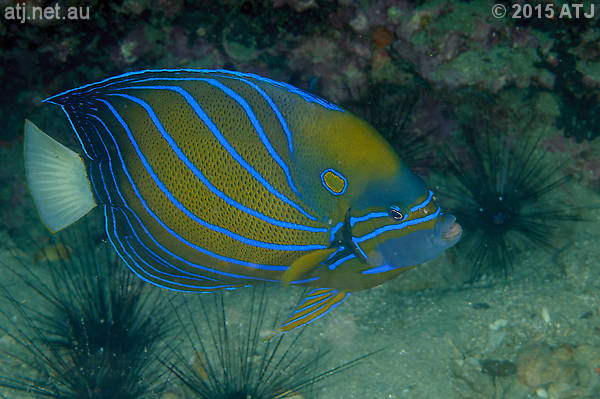 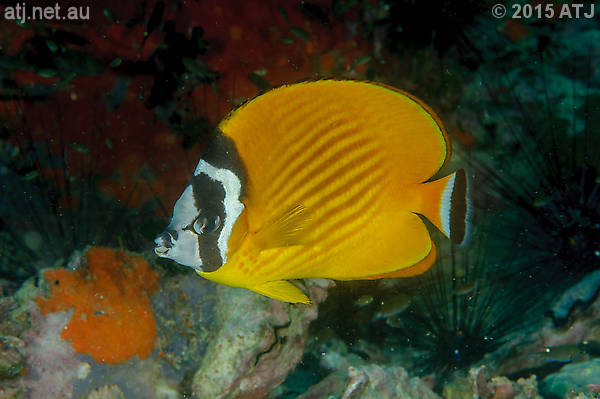 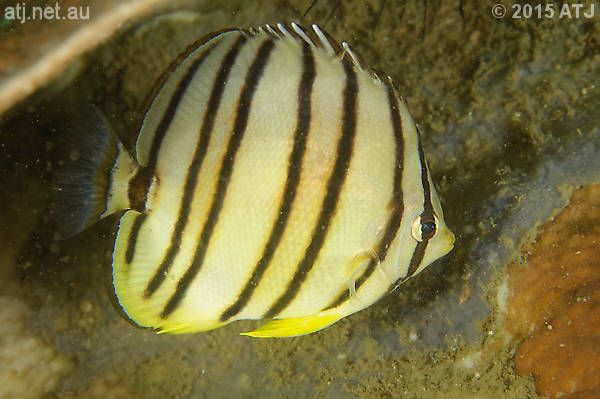 At Kurnell I saw over 50 different weedy seadragons, Phyllopteryx taeniolatus in 2015. Some were individuals I have seen since 2013. Others were new in 2015, including a number of large juveniles and one juvenile that was only 6 to 7 cm long. 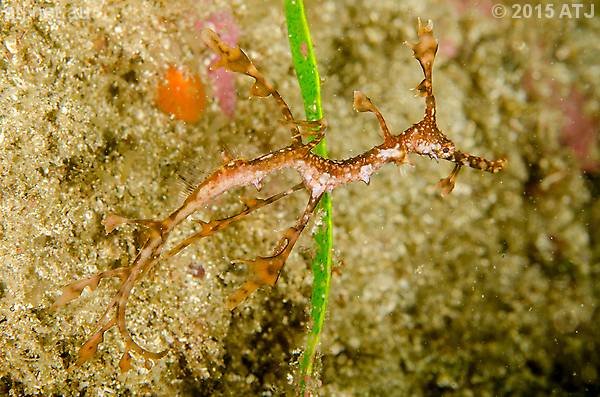 I saw 11 different pot-bellied seahorses, Hippocampus abdomnalis at Kurnell in 2015. Four of those were individuals I had seen previously. I saw "Southern Cross", who I first saw in 2011 (and had been seen by others as early as 2007), a few times in early January and then she disappeared. I have to assume she is dead but 7 years matches the limited data for longevity for the species.

"Rosie", who I first saw in December 2012, went missing after the super storm in April only to show up a few weeks later 800 metres down the shoreline. She moved again from there and I finally found her again in July. She has since been joined by 3 new males, "Noel", "Arnold" and "Daniel". "Rosie" has been around for over 3 years now. 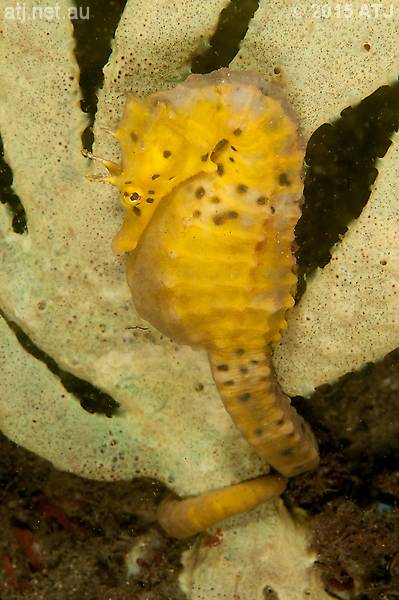 "Rosie" at The Monument.

As mentioned above, 3 new male seahorses, "Noel", "Arnold" and "Daniel", appeared over the latter half of the year and have taken up residence with "Rosie". A new female, "Di", appeared around July. She has since acquired two males, "Joseph" and "Mikhail" but "Joseph" has already disappeared. There was another new male, "Greg", that I saw for a week near "Rosie" but I haven't seen him since.

I saw over 20 different Sydney pygmy pipehorses, Idiotropiscis lumnitzeri at Kurnell over the course of the year. In the first half of the year most were on or near Pygmy Rock at The Leap but in the second half of the year I found more near The Steps and was able to see these over a number of weeks and months. See: Pygmy Pipehorse Sightings at Kurnell. 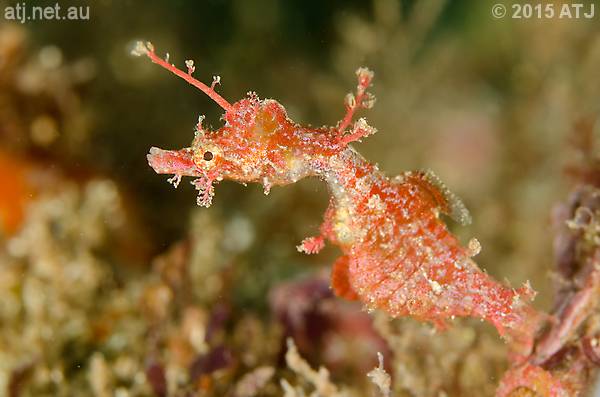 At Bare Island I saw over 60 different Sydney pygmy pipehorses, Idiotropiscis lumnitzeri, many of which I located myself. I really have my eye in now for finding them, even tiny juveniles. See: Pygmy Pipehorse Sightings at Bare Island. 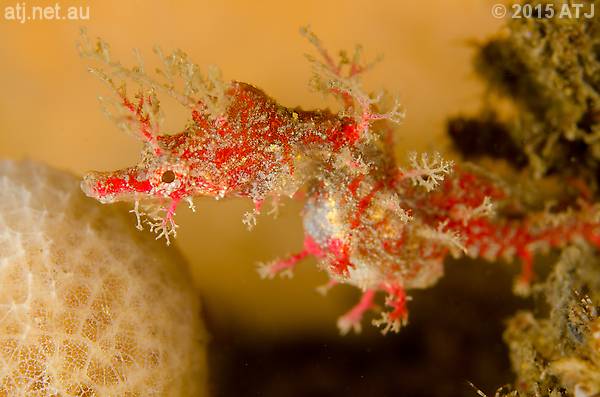 I only saw 4 pot-bellied seahorses, Hippocampus abdomnalis at Bare Island in 2015. There were three regulars but they disappeared after the super storm that hit Sydney in April. I have spoken to other divers who have seen them but I have not been able to find them myself. I did see a juvenile female shortly after the storm but was not able to find her again. 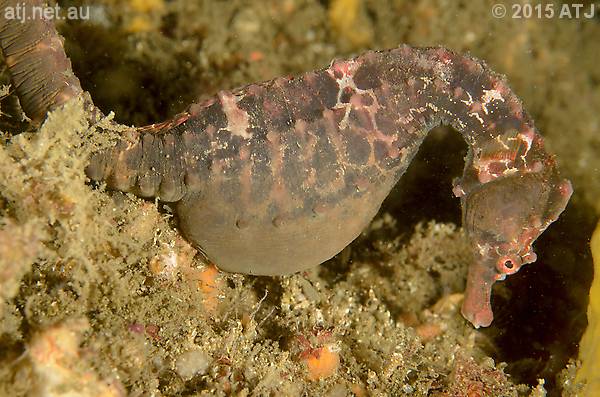 "Della", one of the pot-bellied seahorses, Hippocampus abdominalis, seen at Bare Island.

I saw a weedy seadragon, Phyllopteryx taeniolatus at Bare Island, in February. It has been some years since I have seen one there. It was at the bottom of the slope and was around for a week or so.

I am now participating in two different syngnathid surveys. One is for Project Seahorse and the other is a local survey for the syngnathids around Sydney (Sydney Seahorse Survey). These surveys give me extra incentive to find and record syngnathids on my dives.

There are so many people to thank for helping and sharing in my diving for 2015. Thanks to Joe Kent for the use of his compressor for air/nitrox fills. Not only is it convenient and cheap I also get great fills. Thanks to Nicci from Sub Aquatics for the dives she led. Thanks to Della, Tomas, Andrey, Alex, Mic, Ben and others from Scubathlon for the dives and friendship. Thanks to Noel, Di, Kim and Vicki for the creature spotting. Thanks to everyone else I dived with in 2015 whom I haven't mentioned.

I'm looking forward to an exciting 2016.