I don't think 2014 was a better year for diving than 2013 but it came pretty close. I didn't do as many dives but I still saw many incredible things and even saw some new things. I also managed to get at least one dive in for every weekend of the year.

I'll cover the boring statistics first and then I can concentrate on the fun stuff. In 2014 I did a total of 130 dives which is 43 fewer dives than in 2013. I'm not sure why I did so many dives fewer than 2013. I did 3 trips away, although the Bali trip was only 19 dives compared to 31 dives on the Raja Ampat trip in 2013. Considering that I dived every weekend of the year my tally perhaps should have been higher.

My average dive time was a bit less than 2013. I averaged a bit less than 70 minutes in 2014 down from 73 minutes in 2013. I did a lot less night dives in 2014 and they are usually quite long. I also had a few short dives, like the 25 minute dive at Swansea and 10 of the dives in Bali were less than 60 minutes. I did manage a 92 minute dive at The Leap. That was with a good fill and floating motionless for 30 minutes watching a pregnant seahorse hoping he would give birth.

I dived every single weekend of 2014. Some weekends I only got the one dive in but others I dived 4 or more dives. There were at least 2 weekends where the conditions were very poor and the dives were not all that enjoyable but most dives were good. I even dived on the morning I arrived back from Bali thanks to my chauffeur and dive buddy, Sheree. I have actually dived every weekend since April 2013 and want to see how long I can keep the run going. I find it good incentive to dive every weekend, not that I really need the incentive.

I dived at The Leap 51 times in 2014. That's an average of almost every weekend. It is clear that I love diving The Leap.

My last dive of the year was also my 930th "logged" dive. I say "logged" as I know I have done a lot more that aren't in my online log. I lost my paper logs covering the period from late 1980 through 1998. I wasn't diving all that regularly back then, but I think I would have done on average 5-10 dives a year. It won't take me long now to reach 1,000 logged dives.

In March I joined Friday Dive Club for a weekend at South West Rocks where we dived Fish Rock. Fish Rock has two main attractions: grey nurse sharks and the Fish Rock Cave. The grey nurse colony is quite large and it is easy to swim amongst the sharks. I got some great photographs and footage of the sharks. The cave at Fish Rock goes from one side of the island to the other, all underwater. It was an exciting experience and we got to do it twice.

Later in March I went to Bali with Friday Dive Club for a week of diving. This was my third dive trip to Indonesia in as many years and the first time I had dived around Bali. The trip was with Bali Scuba. We travelled by bus to Menjangan in the north west of the island and made our way back around the north and east coasts diving at Menjangan, Tulumben, Seraya, Amed, Gili Mimpang, Gili Tepekong and finally Nusa Penida. I saw some amazing things including my first Mola mola.

In May, I went to Nelson Bay with friends Sheree, Kylie and Pete for a bit of diving. I had high hopes for 5 or even 6 dives over the weekend, a night dive on Friday night, 2 dives on each of Saturday and Sunday and a possibly a night dive on Saturday. I did the night dive on Friday night at Seahorse Gardens with Dave Harasti and Paul Rudder. It was a great dive and conditions were good. Shortly after we got out after the dive, a howling westerly wind came through and stayed for the weekend. The wind pretty much ruined any chance of diving around Nelson Bay for the rest of the weekend, although Sheree, Kylie, and I managed to get a dive in on Saturday afternoon at Fly Point but conditions were not ideal. I went back later in the year with Sheree and Sally for a day trip and we dived Seahorse Gardens and Fly Point.

During 2014 I dived many times at my regular locations, especially at Kurnell. I also did some dives in some new locations. All the locations in Bali were new.

We dived Swansea Bridge on the way up to South West Rocks. This site is tide dependent and the idea is to jump in around 30 minutes before high tide, swim with the incoming tide to the bridge, swim around the bridge while the tide changes and then come back with the outgoing tide. Unfortunately, we got in a bit late and only had 15 to 20 minutes before the outgoing tide made it nearly impossible to keep diving. What we saw was quite interesting and we'll have to go back again. Dive details

I was quite surprised that in all the years I have been diving I had never dived at Fairlight. We did one dive there in April and while it wasn't an outstanding dive site it was a fun dive. The visibility was not great but we saw a lot of fish and many nudibranchs. Dive details

I ended up doing two dives at Seahorse Gardens, Nelson Bay. My first dive was a night dive with Dave Harasti and Paul Rudder. It was a fun dive and there was a lot to see. Dive details

I dived there again for a day dive with Sheree in November. The visibility was not great but we saw a lot. Dive details

Even though I have been diving since 1978, I still managed to see a number of species for the first time in 2014. Some of those species were from my trip to Bali so they aren't all that surprising but some of the ones I saw in Sydney were quite mind blowing that I had never seen them before.

I have loved cephalopods since I started diving in 1978. I always enjoy seeing cephalopods and seeing new species is a special treat. I saw two species new to me in 2014: Papuan cuttlefish, Sepia papuensis, and southern pygmy squid, Idiosepius notoides. I saw both of these on my night dive at Seahorse Gardens, Nelson Bay. I have wanted to see the Papuan Cuttlefish for some time but I don't believe I have dived anywhere they inhabit. Just before the dive at Seahorse Gardens, Dave told me about these cuttlefish and how to recognise them. I then saw three on the dive. There were a lot larger than I expected. 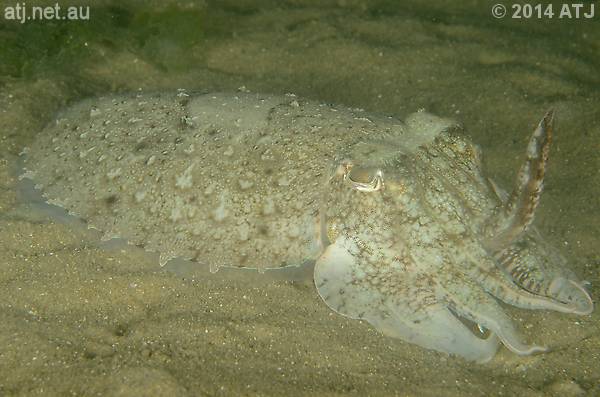 I only saw the one southern pygmy squid and I was not able to get a photograph of it. At least I have seen one and one day I will photograph one.

I saw a few species of crustaceans for the first time on the Bali trip. There was a Donald Duck shrimp, Leander plumosus, I saw on a night dive at Tulamben. 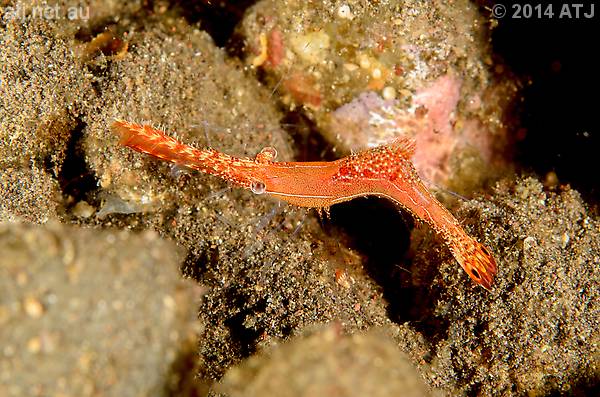 I also saw three harlequin shrimp, Hymenocera picta, at Seraya, but only managed to get a photograph of one of them. 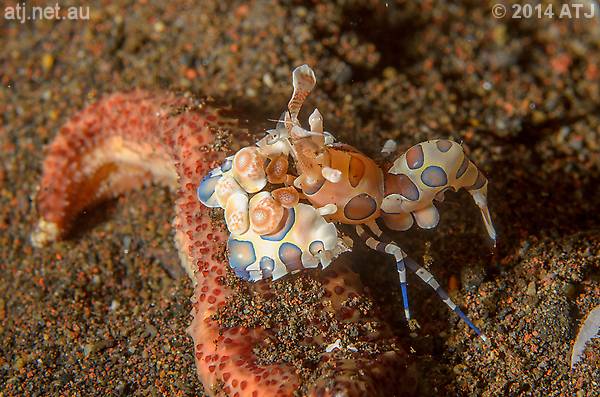 In 2013, especially the second half, I saw a lot of anglers, particularly painted anglers, Antennarius pictus. In 2014, I saw very few. I saw two painted anglers at The Leap, both were originally pointed out to me by fellow divers and I didn't find any myself, although, one of them I saw a number of time over the following months. I did find one at Bare Island in February and then saw it a number of times on subsequent dives. 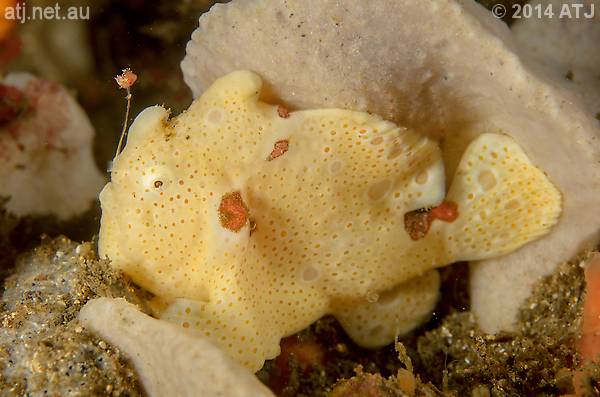 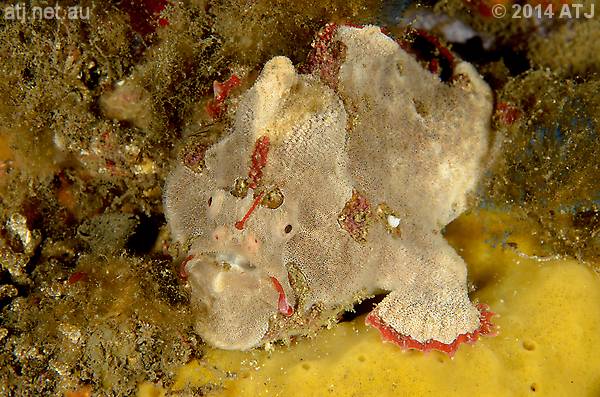 2014 was a good year for syngnathids. Some of the seahorses at Kurnell hit some milestones. "Southern Cross" hit 3 years, "Rosie" hit 2 years and "Pierre" hit 1 year. We had a few new seahorses show up at Kurnell: "Eddie", "Shirley", "Andy", and "Lucky", although the first three have disappeared already. I hope "Lucky" hangs around. He's called "Lucky" because I believe he's the one I saw engulfed by a scorpionfish and he has since escaped. He's the same size and colouration and at the same location. We also lost a couple of seahorses from Kurnell in 2014: "Bob" (who had been around for almost 3 years) and "Lucy". They were last seen together at a new location. I am hopeful they will show up. 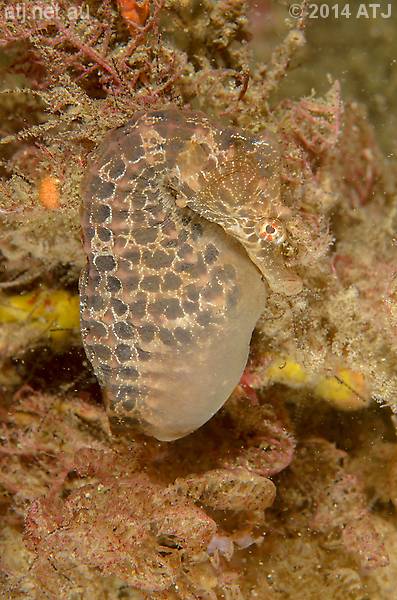 "Lucky", the male pot-belied seahorse, Hippocampus abdominalis, at The Leap.

I saw my first seahorses at Bare Island in 2014. I was initially shown them in January but it took me until February to reliably find the location again. I can now find them without much trouble. In all there were 7 seahorses at that location over the year, although there are only 3 left there. Hopefully, the others have moved to another location and I will eventually find them. 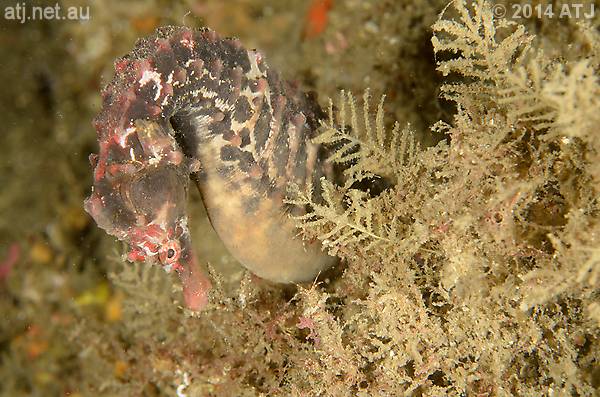 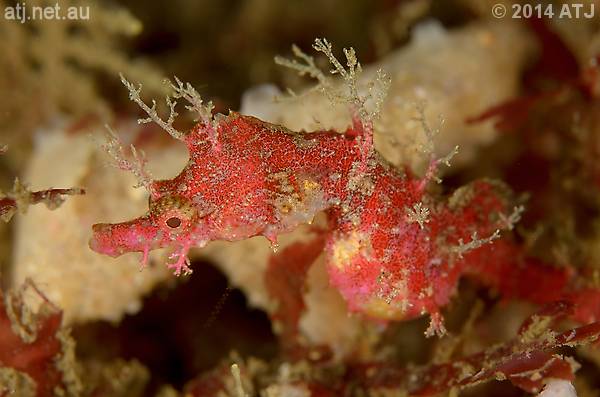 I started taking more complete records of sightings of weedy seadragons, Phyllopteryx taeniolatus, at Kurnell in 2014. Now when I see a weedy seadragon I try to get a photograph of the head from both sides. I can use the pattern of spots on the snout to identify individual seadragons. I then review the photographs from each dive and record each sighting in a database so I can see which weedies I have seen and how often. I am still to fully analyse the data but I know I saw over 30 different individuals on dives at The Leap alone. Many individuals I saw on multiple dives and I saw quite a few males with eggs. I am going to continue the observations over 2015 and see what sort of picture I can paint.

There are so many people to thank for helping and sharing in my diving for 2014. Thanks to St George Underwater and Snorkel Safari Beverly Hills for air/nitrox fills. Also thanks to Joe for the use of his compressor. Thanks to Peter Jaques, Ian Jackson and the rest of the FDC crew for some great dives. Thanks to Nicci from Snorkel Safari for the dives she led. Thanks to Della, Tomas, Andrey and Alex from Scubathlon for the dives and friendship. Thanks to Noel, Di, Kim and Vicki for the creature spotting. Thanks to Sally for the fun dives we did, I hope to dive with you more often in 2015. A big thank you to my regular dive buddy, Sheree Papuni.

I have a trip to Thailand in July which should be interesting. The main purpose of the trip is to attend the wedding of my friend and fellow diver, Sally to Loks, but I hope to get some dives in with Sally and Sheree.

I am still considering getting a rebreather. I didn't get one in 2014 but I know it would be very handy for looking for pygmy pipehorses at The Leap.

I'm looking forward to an exciting 2015.